Did you see Paul Campos' off-base comments in The Atlantic..? Click here to check it out...

Here's my response to Paul Campos and the entire Pro Fat Acceptance nonsense...

When it comes to America's weight issue, there are two categories: 1- People who are overweight 2- People on their way to becoming overweight. I agree w/ Paul Campos. There's no benefit to forcing the fat to become thin. Not gonna happen. Instead, the emphasis must be to reduce the risk for chronic disease in those overweight or obese. That means daily exercise; a non-starchy, non-fried, mostly-vegetarian diet; and water instead of soft drinks, sports drinks or juice. All of the above applies to Category 2 as well. But also we must do all that we can to preserve their health and prevent them from becoming overweight in the first place. That means a focus on pre-pregnancy to age 5, when body composition, eating patterns and exercise habits are being established. How can we justify junk food in school and daycare centers? Or marketing these harmful substances to children in any setting? Tax ingest-able entertainment like sweetened soft drinks and earmark that money for education, safe recreation facilities and affordable produce. Launch campaigns to convince parents to hook their kids on water rather than liquid candy. Re-cast our nation as one in pursuit of the long-term pleasures of good health rather than the quick fix high of junk food. Nutshell? Prevention: Prevention from the overweight and obese from becoming heavier and sicker. Prevention from the next generation from becoming sickly and overweight in the first place.

Want to debate whether or not the obese are already sick? Ask an orthopedic specialist. Ask any doctor who understands the effects of obesity-induced, excess estrogen on men, women and children. Ask heart specialists who understand silent inflammation associated with obesity... Obesity is associated with a higher incidence of infertility, pregnancy complications and ultimately, birth defects. So forget what Campos or I think--debate the matter with Darwin.

Even Darwin would have a hard time explaining Rush Limbaugh... Yesterday he reviewed my Campbell Brown CNN appearance and called me a B-I-tch. Know what? I kinda agree. But other than that one point, not so much.

A challenge for Rush Limbaugh??

Rush ba-bee, if ya don't want anyone to have an opinion about what you eat and how much you don't exercise, then by all means, pay 100% out-of-pocket for any obesity-related health consequences from your lifestyle choices...and of course, forfeit any future claims from Medicare. Put your convictions where your mouth is, Rush. xxxooo, MeMe "the bitch" Roth
Posted by MeMe Roth at 10:35 AM 1 comment:

Was thrilled to attend the CDC's "Weight of the Nation" conference this week in Washington, DC. The big news? The annual price tag for obesity has gone up to $147 Billion...

Wanna offset some of that obesity price tag? What do you think of a sweetened beverage tax--or the "Soda Tax"..? Just chatted this up on CNN. Check it out.
Posted by MeMe Roth at 2:33 PM No comments:

A Case Against an Overweight Surgeon General 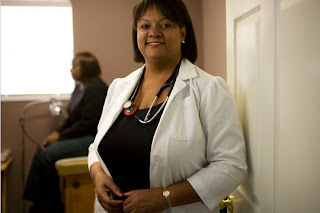 Our Surgeon General can’t be fat.

Somebody should have said that as a prerequisite, behind closed doors, sparing us—and Dr. Regina Benjamin—public embarrassment.

More politically correct, it should have been stated that whomever would be considered to lead our nation out of today’s obesity and diabetes twin public health crises (with an eye on every other public health threat), must exemplify a personal health lifestyle comprising a mostly vegetarian diet (appropriately-portioned, non-starchy), and daily exercise—the standard prescription for preventing chronic disease and premature death.

Or perhaps the Obama administration should have checked with the Surgeon General’s office and its Public Health Service Commissioned Corps, where standard weight requirements are published and must be met before a candidate is considered for employment. A woman between the ages of 51-64 at the average height of five foot four can be no more than 160 pounds.

Failure to meet these basic requirements obviates further consideration. The only exception might be a candidate, who regardless of personal practices, demonstrated quantitative success in reversing obesity and diabetes trends within a U.S. state or large municipality—Another preclusion from considering Dr. Benjamin. Her home state Alabama is the second fattest in the nation with more than 31% adults obese, trailing only Mississippi.

When it comes to health care, President Obama has a considerable challenge in driving down costs—especially the estimated $700 billion spent annually on unnecessary procedures and prescriptions, many of which are consequences of lifestyle choices: smoking, improper eating, inactivity. These elective illnesses include type 2 diabetes, a third of common cancers, heart disease, orthopedic failure, dementia, gout, kidney stones, gallbladder disease—the list continues totaling more than $90 billion spent annually on obesity (half of that on obesity for Medicare), and $40 billion spent annually by employers due to employee obesity. The human cost is incalculable. But experts estimate obesity claims more than 200,000 American lives annually—more than 600 everyday.

Now more than ever, we recognize our role in our own health outcomes and the day-to-day decisions that either increase or decrease our likelihood for chronic disease or premature death. Yet knowing isn’t doing. A mere 8% of American citizens—according to the government’s most recent National Health and Nutrition Examination Study—eschew cigarettes, limit alcohol to one or two glasses daily, eat recommended portions of produce and exercise regularly. Our next Surgeon General must come from this health-promoting 8%.

Dr. Benjamin is beloved by her food-as-payment patients she good-humoredly credits for her extra weight. And there’s no denying her myriad and stellar credentials. The New York Times dubbed this renowned and respected doctor an “angel in a white coat.” And among her many distinguishing honors, commendations have been bestowed upon her in the name of the pope and Mother Theresa. As a devout Catholic, Regina Benjamin might be better suited for sainthood than Surgeon General.

But what of her role as a model of prevention? A guide for reducing unnecessary health costs and human suffering? What is her obligation, if any, to African-American women—our largest category of obesity, and a segment prone to hypertension and type 2 diabetes at lower body-fat percentages than Caucasian?

In the midst of one of the greatest public health challenges our nation has faced, a do-as-I-say-not-as-I-do doc is unfit to serve as Surgeon General.
Posted by MeMe Roth at 10:44 PM 3 comments: