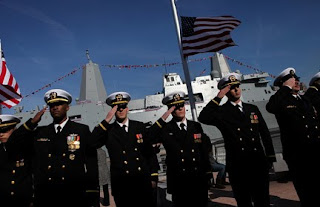 Visited the awe-inspiring, billion dollar, U.S.S. New York yesterday. Some 7.5 tons of Twin Towers steel was used in its making...

There were Amphibious Assault Vehicles, tanks, JEEPs, shoulder-rocket-launchers, all kinds of big guns...

The military personnel had such pride as they demonstrated the munitions and toured thousands of guests around their ship--our ship. We were ever mindful of how young these kids in uniform are and the peril each serviceman and woman might face. We wished them all a safe return...

Yesterday was Veteran's Day, and I'm proud to say my brother served in Desert Storm, my father served in Vietnam and my Grandfather, Major Robert L. Clements, 101st Airborne, 502nd Division, G Company, served during WWII, including parachuting into Normandy on D-Day. He survived many battle wounds and was awarded 3 Purple Hearts, and most honorably, the Silver Star.

He never spoke of The War until his final years. I think it was all too much. If you've ever viewed the excellent "Band of Brothers" miniseries, you'll know where my grandfather was and what he and his fellow brethren did. While greatly-decorated, war also left him conflicted and well, mean.

My grandfather served his country with honor and courage. I feel proud to write that. I also feel compelled to write that I'm not much for war as a means to solve anything. And if the draft came about, I'd likely show little courage compared to my grandfather, father or brother. If it came to my son, would I consider Canada? Or maybe fatten him up like so many of today's youth who've eaten themselves unfit to serve...

75% of today's youth are unfit for military recruitment. The biggest factor? Overweight and obesity.

I keep thinking that the power and deep pockets of the Pentagon will step-in and do something material about reversing child obesity. While I see the pointed irony, I also see the history. When our youths were unfit to serve several decades ago due to undernourishment, Harry S. Truman enacted America's National School Lunch Act and said, "In the long view, no nation is any healthier than its children..."

So true. So true.

Happy Veterans Day. And our deepest gratitude for your service to our country.
Posted by MeMe Roth at 10:52 PM

The UK seems to be ahead of us on this issue, though the recent media coverage of that 75% figure is heartening.

I have an idea for a PSA about obesity as a national security issue:

Series of shots: Obese soldiers in formation. An obese soldier struggling to pull himself out the top of a tank (like the obese zombie stuck in a manhole in Weird Al's "Eat It" video). Obese soldiers on the battlefield. And so on. End with obese soldiers crammed into a Blackhawk helicopter. Zoom in on a red flashing warning sign: OVERWEIGHT!! Cut to a Middle Eastern skyline as the helicopter falls and a radio operator says, "Blackhawk down..."

The voiceover would give ominous facts and warnings about obesity affecting national security. Who will fight the wars of the future? Who will defend America? And so on. Real audio clips from Congressmen and Generals would be nice.