Lost Your Place in Line for Swine Flu Vaccine..? 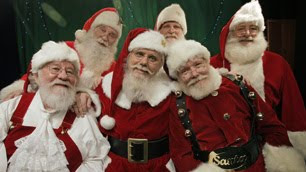 Ho Ho Ho..! Santas want to be first in line for H1N1 shots. Should you get a lump of coal if Santa wants to cut in front of you in the vaccine line...and you say "no, no no?"

The W.H.O. says those with underlying health risks should go to the front of the swine flu shot line. That includes the obese and those with type 2 diabetes.

9 times out of 10, those who are obese or develop type 2 diabetes are suffering the consequences of habitual, improper eating. Typically we're talking too much of the right food, too much of the wrong food, or a combo of both. Does that mean they deserve to cut..?

In Santa's defense, he comes in contact with gobs of kiddie germs all holiday season long. Plus, he's a prime candidate for spreading swine flu...

A couple years ago I did several news appearances when the governing body for all mall Santa Clauses (yep, there really is such an organization.), having realized the majority of Santas weren't just obese, but dangerously, morbidly obese, asked their membership to lose weight. I mentioned that America's current depiction of Santa Claus is an incredibly successful marketing device of the Coca-Cola Company. They may not have invented Santa, but Coke spent millions embedding his larger-than-life image into our minds. Kris Kringle, Father Christmas, and St. Nick historically hadn't been portrayed so pervasively portly.

I wondered if maybe it was time for a more Jack LaLanne-like Santa, what with Santa having all those heavy gifts to deliver and circumnavigating the globe in one night... Since then, I've had to read all over the place that I called Santa "fat." No kidding. Even The New York Times reported that silliness... I got dumped from a speaking gig because of it. Talk about wrongfully being put on the "naughty" list..!

So Santa's obesity and non-stop cootie contamination put him in line for the H1N1 vaccine in front of whom? You? Your Kids..? Pregnant Women..?

And what about type 2 diabetics... Do they get their swine flu shots before you too..?
Posted by MeMe Roth at 12:02 AM