We All Knew "Smart Choice" Was Dumb... 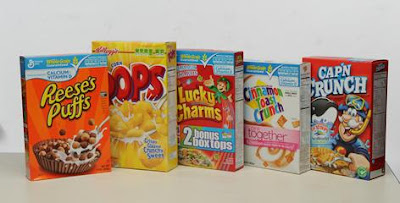 "Smart Choice"... and all those silly industry-sponsored food-labeling systems telling us what is "better for you..." Pepsi, Kellogg's, Kraft... Up till two years ago Kraft was part of Philip Morris, aka, Altria...

Fruit Loops, with its first ingredient being sugar, is a "Smart Choice." Thank goodness Smart Choice has been suspended due to pressure from the Yale Rudd Center, CSPI, Connecticut's Attorney General Richard Blumenthal, NAAO, and a whole host of nutrition, health and obesity experts.

It was big news this week in DC at the annual meeting of the Pharma-backed Obesity Society. Other big news was that most of the marketing money spent to promote cereal to kids is spent on the least healthy "boxed breakfast candy." No surprise, right?

I spoke about this today on the Fox Business Network with Stuart Varney. (Stuart always gives me hell on screen and off...maybe a hater crush??...) Check it out...

CSPI likes the idea of having the IOM suggest uniform labeling guidelines to the FDA... I also like what Yale's Dr. David Katz is doing with his NuVal system of grading food products on a scale of 1-100 based on nutrition value.

Whatever system is decided upon, we know we need a clear, concise, universally adopted food labeling system we all can trust. If we're gonna eat it, we should know what "it" is...
Posted by MeMe Roth at 2:23 AM

Thanks for the insightful and pithy commentary. Keep it coming.